Dave knocked hesitantly on the door to Chloe’s new office, “Femme Believing Investigations” emblazoned on it in pink on a lilac shield. The door opened to a bustling bullpen, only… not like the one’s he was used to. Interview rooms lined the walls; pairs of comfy chairs inside so consults could be done in private.  He frowned as he looked around. He recognized these people. Margot was sipping tea with a sullen teen. Vanessa was working on a sketch with what looked like a street walker. And was that Frank talking to an elderly woman in the corner? Is this where everyone who had quit the force recently had gone?

Chloe came out of an office, escorting a young woman and a small boy out. “Don’t worry Mrs. Flannigan. We’ll make sure he can’t do it again.” The woman smiles gratefully, leading the boy out. Chloe turns to Dave, assessing him coolly. “What are you doing here Dave?”

“Uh, I think I need your help?” He looks at her, awkwardly rubbing the back of his neck.

One brow arches elegantly. “Oh, really? Who is it this time?” She motions towards her office, closing the door behind them and sitting in her chair. She picks up her cup and takes a sip.

“Aren’t you going to offer me a coffee?”

“No. I thought I was pretty clear about not wanting to work with you the last time we spoke yet here you are. So, you can tell me what it is you think you need from me, or you can leave. Your choice.” She takes another sip.

He sighs, settling onto the couch across from her. “It’s the mayor. There have been… accusations of… impropriety against him recently.”

“Yeah, and? He’s a creep. He grabbed my ass the last time I got a commendation. You asked me if I was sure it happened. Why do you care now?”

He gives her a pained look. “He was the mayor! He’s always been socially awkward. I thought-“

“He’s not socially awkward. He’s a perv that expects other men to cover for him because he’s careful not do anything while they’re looking. You still haven’t answered the question. Why. Are. You. Here?”

He has the decency to flush with embarrassment. “There are a lot of women coming forward. We didn’t know how bad it was.”

“You mean you didn’t want to know.” She fixes him with a hard look. “It took a preponderance of evidence before you’d believe us. I was your PARTNER and you still didn’t believe me.” She set down the mug with a thunk, her gaze steely. “You still haven’t answered the question. Why. Are. You. Here?”

“Wh… What are we supposed to do?” He looks at her. “How can we make this different?”

“Well. To start with, you can try believing women when they tell you this stuff. Before you ask them a question, ask yourself: Would I be asking this question if a guy told me the same thing?” 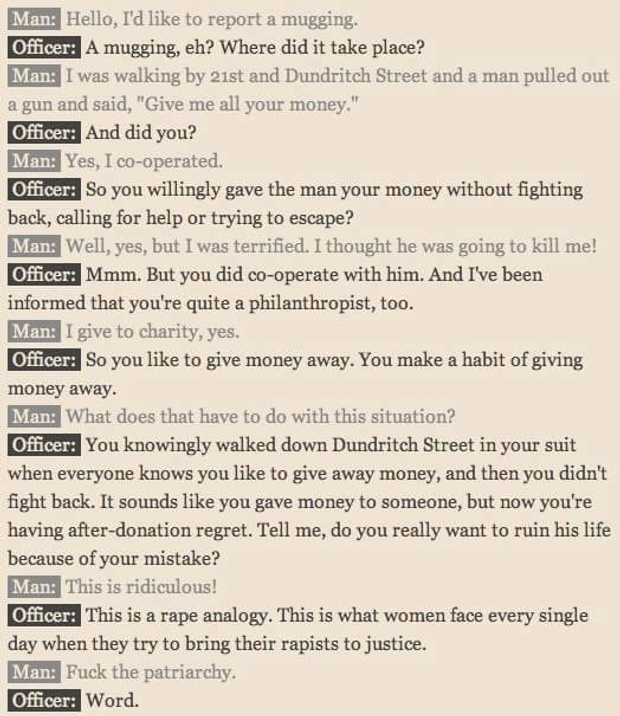